Note: The graphs have been changed. If you click on a graph, a larger image will appear with thumbnails of all the graphs in the post below the larger image. This is very fast and does not use scripting like the previous graph gallery. To close the window, just click on the “X” in the upper right. For RSS readers, just the large image will appear. There are new graph galleries (very fast) that group graphs by topic (I’ll add all the previous galleries soon).

The key story of the week was the European agreement including 1) “develop a voluntary bond exchange with a nominal discount of 50% on notional Greek debt held by private investors”, 2) “to leverage the resources of the EFSF”, and 3) an “agreement … by the members of the European Council on bank recapitalisation and funding”. Here is the Euro Summit Statement. This is short on details, and without ECB support, mostly just “kicks the can” down the road a few more months.

Another key story was the updated HARP refinance program. Here is the statement from the FHFA: FHFA, Fannie Mae and Freddie Mac Announce HARP Changes to Reach More Borrowers. I wrote two short posts about this last week: A few comments on the HARP Refinance Program changes and More on HARP and Housing. I think this will be helpful and reach more borrowers.

I expect more housing related policy announcements within the next month or two, including the mortgage settlement with lenders are servicers, and a pilot program for Fannie/Freddie/FHA REO disposition.

The U.S. economic data was mixed, but seemed to indicate a little improvement. GDP growth was reported at 2.5% in Q3 (real, annualized). That was an improvement from the first half of the year, but still very sluggish.

New home sales were up slightly to a still very low 313 thousand in September. House prices indexes were mixed with Case-Shiller showing a small seasonal increase in prices – although the prices index will start showing declines soon and will probably fall to new post-bubble lows during the winter months.

Next week will be very busy including the employment report and the FOMC meeting. I'll have some preview posts tomorrow (and later in the week for employment). 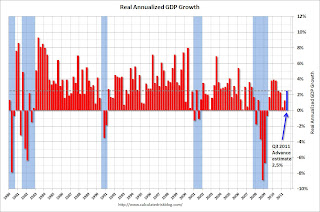 This graph shows the quarterly GDP growth (at an annual rate) for the last 30 years. The dashed line is the current growth rate. Growth in Q2 at 2.5% annualized was below trend growth (around 3%) - and very weak for a recovery, especially with all the slack in the system.

Note: There are really two measures of GDP: 1) real GDP, and 2) real Gross Domestic Income (GDI). The BEA will release GDI with the 2nd GDP estimate for Q3. GDI was back to the pre-recession peak in Q2. 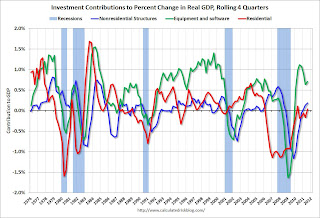 For the following graph, red is residential, green is equipment and software, and blue is investment in non-residential structures. The usual pattern - both into and out of recessions is - red, green, blue.Residential Investment (RI) made a positive contribution to GDP in Q3 2011, and the four quarter rolling average finally turned positive in Q3.

Equipment and software investment has made a significant positive contribution to GDP for nine straight quarters (it is coincident). The contribution from nonresidential investment in structures was positive in Q3. 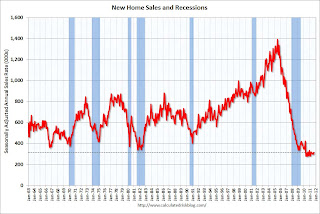 The Census Bureau reports New Home Sales in September were at a seasonally adjusted annual rate (SAAR) of 313 thousand. This was up from a revised 296 thousand in August (revised up from 295 thousand).

This graph shows New Home Sales vs. recessions since 1963. The dashed line is the current sales rate. 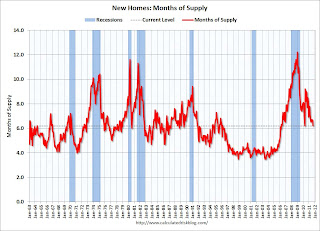 Months of supply decreased to 6.2 in September. The all time record was 12.1 months of supply in January 2009. This is still slightly higher than normal (less than 6 months supply is normal). 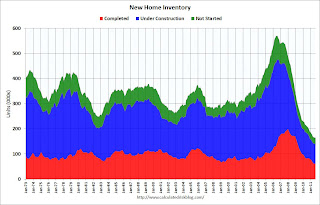 The inventory of completed homes for sale was at 61,000 units in September. The combined total of completed and under construction is at the lowest level since this series started. 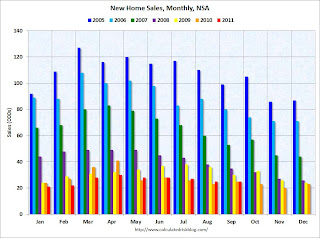 This was above the consensus forecast of 300 thousand, and was tied the record low for the month of September set last year (NSA). New home sales have averaged only 300 thousand SAAR over the 17 months since the expiration of the tax credit ... mostly moving sideways at a very low level (with a little upward slope recently). 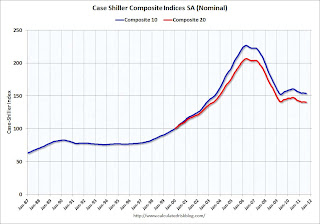 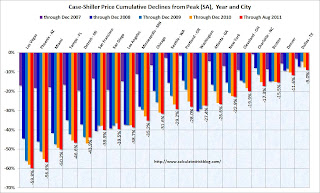 Case-Shiller, CoreLogic and others report nominal house prices. However it is also useful to look at house prices in real terms (adjusted for inflation), as a price-to-rent ratio, and also price-to-income (not shown here). 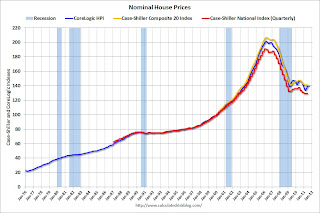 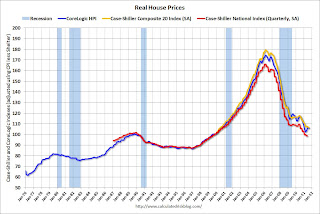 The next graph shows the same three indexes in real terms (adjusted for inflation using CPI less Shelter). Note: some people use other inflation measures to adjust for real prices.

In real terms, all appreciation in the last decade is gone. 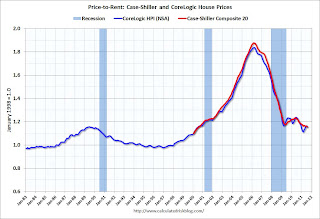 In real terms - and as a price-to-rent ratio - prices are mostly back to 2000 levels (nationally) and will probably be back to 1999 levels in the next few months. 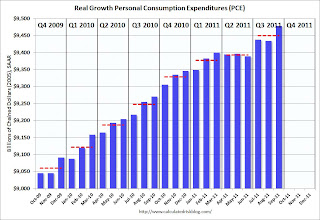 The personal saving rate was at 3.6% in Setpember. 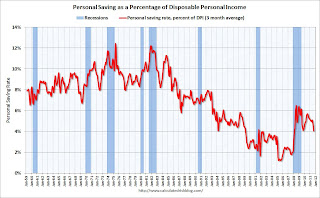 This graph shows the saving rate starting in 1959 (using a three month trailing average for smoothing) through the September Personal Income report.

Spending is growing faster than incomes - and the saving rate has been declining. That can't continue for long ... 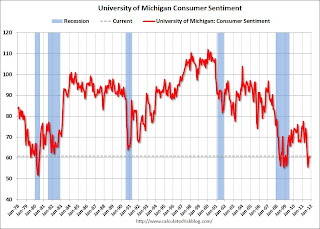 The final October Reuters / University of Michigan consumer sentiment index increased to 60.9, up from the preliminary October reading of 57.5, and up from 59.4 in September.

In general consumer sentiment is a coincident indicator and is usually impacted by employment (and the unemployment rate) and gasoline prices. In August, sentiment was probably negatively impacted by the debt ceiling debate.

This was still very weak, but above the consensus forecast of 58.0. 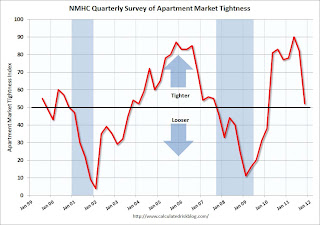 The index has indicated tighter market conditions for the last seven quarters and although down from the record 90 earlier this year, this still suggests falling vacancy rates and or rising rents.

New multi-family construction is one of the few bright spots for the U.S. economy and this survey indicates demand for apartments is still strong. 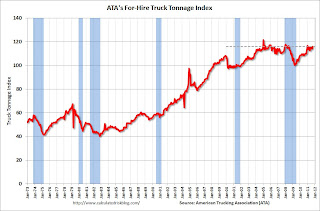