This was a busy week for economic data, but the key story of the week was the August employment report - and the report was dismal. There were no jobs added in August (zero total non-farm and 17,000 private sector jobs added). Also the BLS revised down payrolls for June and July.

The unemployment rate was unchanged at 9.1%, but U-6, an alternate measure of labor underutilization that includes part time workers and marginally attached workers, increased to 16.2%; this is at the high for the year. The average workweek declined slightly to 34.2 hours, and average hourly earnings decreased.

There were special factors in August - the debt ceiling shock to the economy and the Verizon strike - but overall this was another very weak report. The good news is August is over.

The other economic data was weak, but for the most part better than expected. The ISM manufacturing index and the regional data (Chicago PMI and Texas Manufacturing survey) were weak, but showed expansion.

Consumer spending in July was solid, but will probably be weaker in August due to the confidence shattering debt ceiling debate. Auto sales in August were down slightly from July - not too bad considering the debt ceiling shock and that Hurricane Irene hit during the last weekend of the month.

There was a theme: Data sampled in early August, like the employment report, tended to be especially weak, but data sampled later in the month, while still very weak, was not as quite as grim. This suggests that the debt ceiling debate, and possibly the European debt crisis, impacted consumer and business confidence early in August.

Unfortunately the European crisis is once again in the news with more negotiations about the next Greece bailout. Also bond yields for Italy and Spain are starting to increase again (although Ireland is doing better). This will be something to watch over the next few weeks. 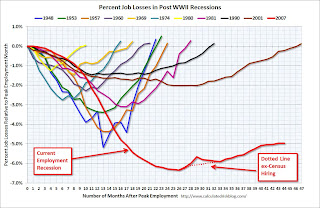 In this post, the graph shows the job losses aligned at maximum job losses.

The red line is moving sideways - and I'll need to expand the graph soon. 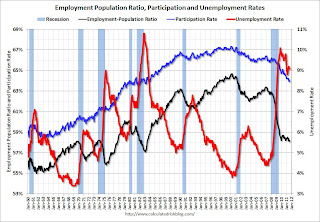 The Labor Force Participation Rate increased to 64.0% in August (blue line). This is the percentage of the working age population in the labor force.

The Employment-Population ratio increased to 58.2% in August (black line). 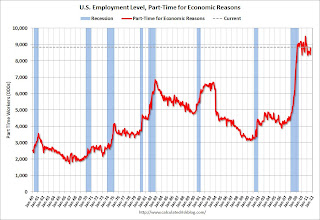 The number of workers only able to find part time jobs (or have had their hours cut for economic reasons) increased to 8.826 million in August from 8.396 million in July.

These workers are included in the alternate measure of labor underutilization (U-6) that increased to 16.2% in August from 16.1% in July. This is at the high for the year.

The next graph shows the duration of unemployment as a percent of the civilian labor force. 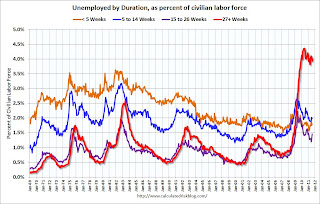 Two categories declined in August: The 27 weeks and more (the long term unemployed) declined slightly to 6.0 million workers, or just under 4.0% of the labor force, and the '5 to 14 weeks' category edged down slightly.

The other two categories increased, especially the '15 to 26 weeks' group that increased to 2.24 million or almost 1.5% of the labor force - the highest level since January. 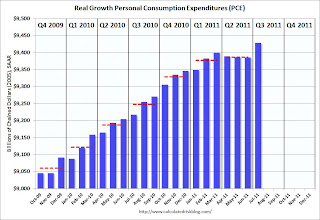 Real PCE was revised up a little for Q2 too. This was a solid increase in spending and above the consensus of 0.5% - however I expect August to be weaker due to the confidence shattering debt ceiling debate.

From S&P: Nationally, Home Prices Went Up in the Second Quarter of 2011 According to the S&P/Case-Shiller Home Price Indices 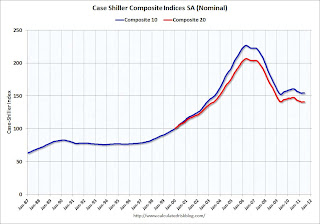 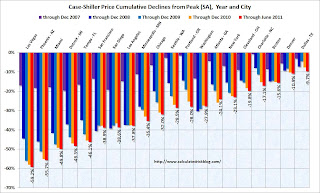 Here are the price declines from the peak for each city included in S&P/Case-Shiller indices.

Prices increased (SA) in 8 of the 20 Case-Shiller cities in June seasonally adjusted. Prices in Las Vegas are off 59.2% from the peak, and prices in Dallas only off 9.7% from the peak.

This increase was mostly seasonal and prices will probably decline later this year.

From the Institute for Supply Management: August 2011 Manufacturing ISM Report On Business® 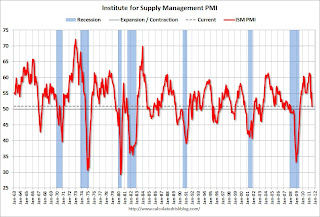 This was above expectations of 48.5% and suggests manufacturing expanded - slowly - in August. 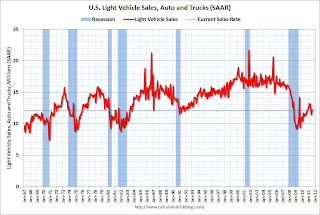 This was right at the consensus forecast of 12.1 million SAAR.

Growth in auto sales should make a positive contribution to Q3 GDP as sales bounce back from the May and June lows. However, so far, sales in Q3 have average 12.16 million, only slightly above the Q2 rate - May and June were very weak, but April was above 13 million SAAR. 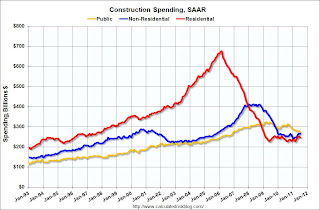 • LPS: Average Loan in Foreclosure Is Delinquent for Record 599 Days 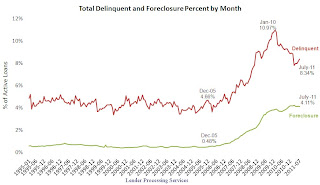 This graph shows the total delinquent and in-foreclosure rates since 1995.

The total delinquent rate has increased recently (part of the increase is seasonal), but the rate has fallen to 8.34% from the peak in January 2010 of 10.97%. A normal rate is probably in the 4% to 5% range, so there is a long long ways to go.

However the in-foreclosure rate at 4.11% is barely below the peak rate of 4.21% in March 2011. There are still a large number of loans in this category (about 2.16 million) - and the average loan in foreclosure has been delinquent for a record 599 days! 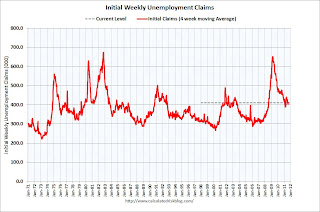 The dashed line on the graph is the current 4-week average. The four-week average of weekly unemployment claims increased this week to 410,250.

Weekly claims declined slightly, but the 4-week average is still elevated. Next week claims will probably increase due to Hurricane Irene.

Have a great weekend.