Schedule for Week of September 4th

The key economic releases this week are the July trade balance report on Thursday, and the August ISM non-manufacturing index on Tuesday.

On Thursday, President Obama will address a joint session of Congress regarding the economy and jobs. Also on Thursday, Fed Chairman Ben Bernanke will speak on the economic outlook. The Fed's Beige Book, to be released on Wednesday, should provide some discussion of the recent economic weakness. 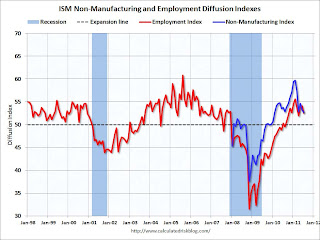 
----- Wednesday, Sept 7th -----
7:00 AM: The Mortgage Bankers Association (MBA) will release the mortgage purchase applications index. This index has been very weak over the last several months and the four average was at the lowest level since 1995 last week. 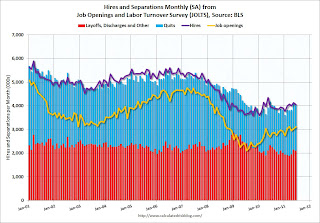 10:00 AM: Job Openings and Labor Turnover Survey for July from the BLS.

In general job openings (yellow) has been trending up - and job openings increased slightly again in June - and were up about 16% year-over-year compared to June 2010.

2:00 PM: Fed's Beige Book. This is an informal review by the Federal Reserve Banks of current economic conditions. 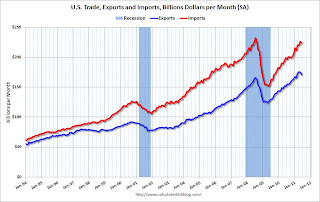 This graph shows the monthly U.S. exports and imports in dollars through June 2011.

3:00 PM: Consumer Credit for July. The consensus is for a $6.0 billion increase in consumer credit.

7:00 PM: President Obama will address a joint session of Congress regarding the economy and jobs.