1) This is pre-crisis data. Sales will decline sharply in March and April.

2) Inventory is very low, and was down 9.8% year-over-year (YoY) in February. Inventory will probably stay low in March as people wait to list their homes. 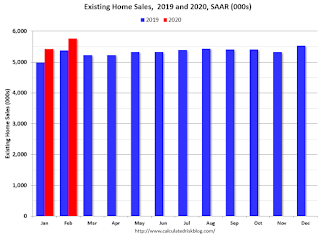 Sales will probably be down sharply year-over-year in March and April.

Note that existing home sales picked up somewhat in the second half of 2019 as interest rates declined. 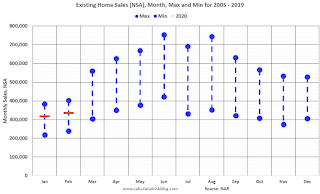 The second graph shows existing home sales Not Seasonally Adjusted (NSA) by month (Red dashes are 2020), and the minimum and maximum for 2005 through 2019.

Overall this was a solid report.   Now, with the pandemic, sales will decline sharply.