Mortgage applications increased 1.5 percent from one week earlier, according to data from the Mortgage Bankers Association’s (MBA) Weekly Mortgage Applications Survey for the week ending November 22, 2019. This week’s results are being compared to the week of Thanksgiving 2018.

Added Kan, “The annual increase in refinance and purchase activity was even more prominent in this report because Thanksgiving was a week earlier last year. However, with roughly five weeks of reporting data left in 2019, the mortgage market is on track for its best year for originations since 2007.”
...
The average contract interest rate for 30-year fixed-rate mortgages with conforming loan balances ($484,350 or less) decreased to 3.97 percent from 3.99 percent, with points decreasing to 0.30 from 0.33 (including the origination fee) for 80 percent loan-to-value ratio (LTV) loans.
emphasis added 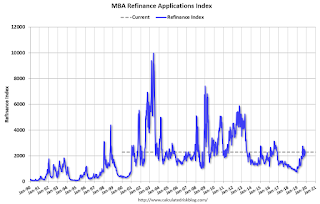 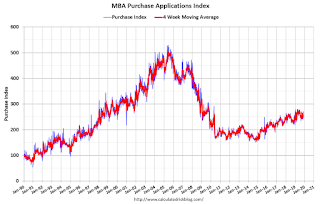 According to the MBA, purchase activity is up 55% year-over-year unadjusted for the Thanksgiving holiday.
Posted by Calculated Risk on 11/27/2019 07:00:00 AM
Newer Post Older Post Home