Total U.S. rail carloads in June 2019 were down 5.3% (57,173 carloads) from June 2018, as just 4 of the 20 carload commodities the AAR tracks had carload gains. ... Last year was the best year ever for intermodal, but this year isn’t keeping up. In June 2019, U.S. intermodal originations were down 7.2% from June 2018, their fifth straight decline and the biggest percentage decline since April 2016.
emphasis added 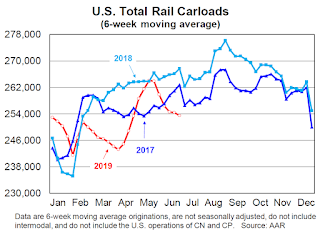 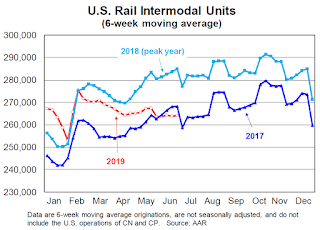 
U.S. intermodal originations totaled 1.08 million containers and trailers in June 2019, down 7.2%, or 84,002 units, from June 2018. The 7.2% decline was the fifth straight monthly decline and the biggest percentage decline since April 2016. … U.S. intermodal volume in the first half of 2019 was higher than every other year other than 2018 (see the middle right chart below), so it’s not like this year is a catastrophe.