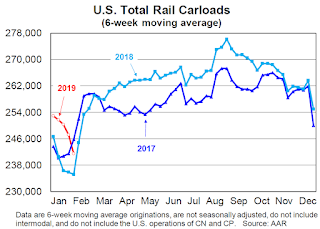 In terms of rail carloads, January (which consists of weeks 1-5) had two parts. For weeks 1-3, total carloads were up 8.1% this year over last year. For weeks 4-5, though, they were down 6.6%. The extreme cold this year at the end of January in many parts of the country limited rail operations substantially, though it’s impossible to precisely calculate what carloads would have been if weather had been more normal. 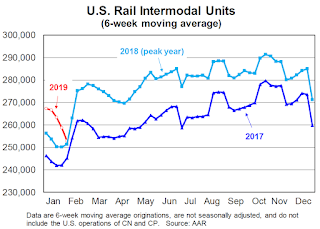 Like carloads, intermodal suffered from the weather. In the first three weeks of 2019, intermodal volume was up 5.7% over last year; weeks 2 and 3 this year were the highest-volume intermodal weeks in January in history for U.S. railroads. In weeks 4-5, though, intermodal was down 6.5% this year over last year, including a 9.6% decline in week 5, when weather was especially cold in much of the country. Again, it’s not possibly to precisely quantify the impact, but it’s reasonable to expect some make-up volume in February.