Schedule for Week of January 20th

Special Note on Government Shutdown: If the Government shutdown continues, then some additional releases will be delayed. For example, this coming week, the new home sales and durable goods reports will not be released if the government remains shutdown - and probably delayed even if the government opens.  (see bottom for key releases already delayed).

The key reports scheduled for this week are December New and Existing Home sales.

All US markets will be closed in observance of Martin Luther King Jr. Day 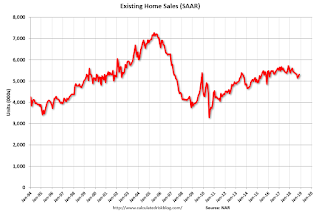 10:00 AM: Existing Home Sales for December from the National Association of Realtors (NAR). The consensus is for 5.24 million SAAR, down from 5.32 million.

The graph shows existing home sales from 1994 through the report last month.

9:00 AM: FHFA House Price Index for November 2018. This was originally a GSE only repeat sales, however there is also an expanded index.

10:00 AM: Richmond Fed Survey of Manufacturing Activity for January.

During the day: The AIA's Architecture Billings Index for December (a leading indicator for commercial real estate).

8:30 AM: The initial weekly unemployment claims report will be released. The consensus is for 217 thousand initial claims, up from 213 thousand the previous week.

11:00 AM: the Kansas City Fed manufacturing survey for December.

8:30 AM: Durable Goods Orders for December from the Census Bureau. The consensus is for a 1.8% increase in durable goods orders. 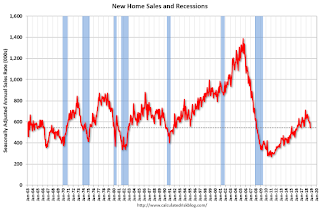 10:00 AM: New Home Sales for December from the Census Bureau.

This graph shows New Home Sales since 1963. The dashed line is the sales rate for October (November was not released).

The consensus is for 565 thousand SAAR.

New Home Sales (Census) for November from the Census Bureau. The consensus was for 560 thousand SAAR, up from 544 thousand in October.

Construction Spending (Census) for November. The consensus was for a 0.3% increase in construction spending.

Trade Balance report (Census) for November from the Census Bureau. The consensus was the trade deficit would be $53.9 billion.  The U.S. trade deficit was at $55.5 billion in October.

Retail sales for December. (Census)  The consensus was for a 0.2% increase in retail sales.