1) The key for housing - and the overall economy - is new home sales, single family housing starts and overall residential investment. Unfortunately this key data is not currently being released due to the government shutdown.  However, overall, this is still a somewhat reasonable level for existing home sales, and the weakness at the end of 2018 was no surprise given the increase in mortgage rates.

2) Inventory is still low, but was up 6.2% year-over-year (YoY) in December. This was the fifth consecutive month with a year-over-year increase in inventory, and the largest YoY increase since January 2014.

3) As usual, housing economist Tom Lawler's forecast was closer to the NAR report than the consensus. See: Lawler; Early Read on Existing Home Sales in December: Big Drop.   The consensus was for sales of 5.24 million SAAR, Lawler estimated the NAR would report 4.97 million SAAR in December, and the NAR actually reported 4.99 million SAAR. 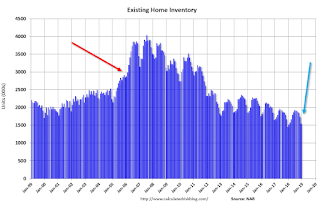 The current YoY increase in inventory is nothing like what happened in 2005 and 2006. In 2005 (see red arrow), inventory kept increasing all year, and that was a sign the bubble was ending.  In 2018 (light blue arrow), inventory followed the normal seasonal pattern.

Also inventory levels remains low, and could increase much more and still be at normal levels. No worries. 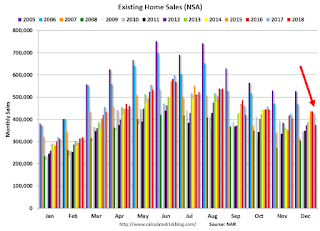