Unemployment rates were lower in September in 9 states, higher in 4 states, and stable in 37 states and the District of Columbia, the U.S. Bureau of Labor Statistics reported today. Sixteen states had jobless rate decreases from a year earlier and 34 states and the District had little or no change.
...
Hawaii had the lowest unemployment rate in September, 2.2 percent. The rates in Arkansas (3.5 percent), California (4.1 percent), Idaho (2.7 percent), South Carolina (3.3 percent), Texas (3.8 percent), and Washington (4.4 percent) set new series lows. (All state series begin in 1976.) Alaska had the highest jobless rate, 6.5 percent.
emphasis added 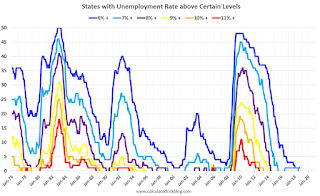