1) The key for the housing - and the overall economy - is new home sales, single family housing starts and overall residential investment. Overall this is a reasonable level for existing home sales, and the recent weakness is no surprise given the increase in mortgage rates.

2) Inventory is still low, but was up 1.1% year-over-year (YoY) in September. This was the second consecutive year-over-year increase in inventory, and the first YoY increases since May 2015.

3) As usual, housing economist Tom Lawler's forecast was closer to the NAR report than the consensus. See: Lawler: Early Read on Existing Home Sales in September.   The consensus was for sales of 5.30 million SAAR, Lawler estimated the NAR would report 5.20 million SAAR in September, and the NAR actually reported 5.15 million. 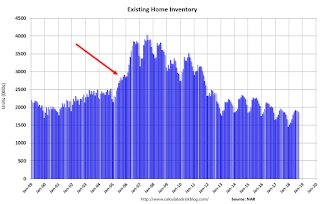 Also inventory levels remains low, and could increase significantly and still be at normal levels. No worries. 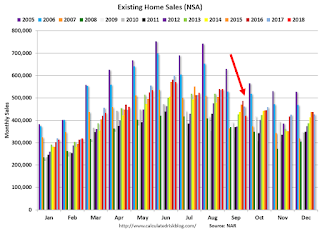 Sales NSA through September (first nine months) are down about 2.1% from the same period in 2017.

This is a small YoY decline in sales to-date - it is likely that higher mortgage rates are impacting sales, and it is possible there has been an impact from the changes to the tax law (eliminating property taxes write-off, etc).