This was a strong employment report.

The unemployment rate was unchanged at 4.9% even as the participation rate increased (another strong household survey).  Not only was the headline number above the consensus forecast, but revisions were up for the previous two months.  This was strong job growth.

In February, the year-over-year change was 2.67 million jobs. 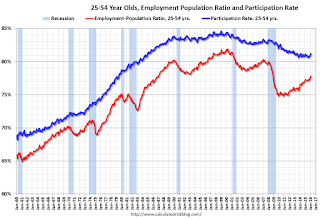 Since the overall participation rate has declined recently due to cyclical (recession) and demographic (aging population, younger people staying in school) reasons, here is the employment-population ratio for the key working age group: 25 to 54 years old. 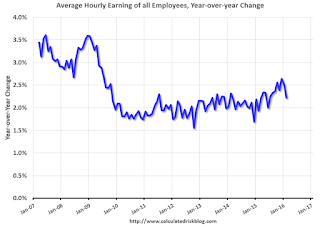 The graph shows the nominal year-over-year change in "Average Hourly Earnings" for all private employees.  Nominal wage growth was at 2.2% YoY in February.  This series is noisy, however overall wage growth is trending up.

Note: CPI has been running under 2%, so there has been real wage growth. 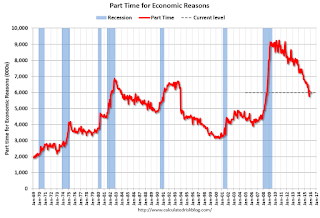 
The number of persons employed part time for economic reasons (also referred to as involuntary part-time workers) was unchanged in February at 6.0 million and has shown little movement since November. These individuals, who would have preferred full-time employment, were working part time because their hours had been cut back or because they were unable to find a full-time job.

The number of persons working part time for economic reasons was little changed in February. This level suggests slack still in the labor market.

These workers are included in the alternate measure of labor underutilization (U-6) that declined to 9.7% in February - the lowest level since May 2008. 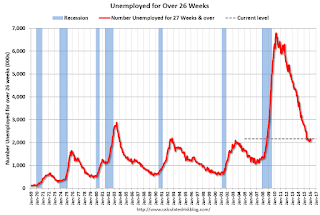 According to the BLS, there are 2.165 million workers who have been unemployed for more than 26 weeks and still want a job. This was up from 2.089 million in January.

This is generally trending down, but is still high.

There are still signs of slack (as example, part time workers for economic reasons and elevated U-6), but there also signs the labor market is tightening.  Overall this was a strong employment report.
Posted by Calculated Risk on 3/04/2016 01:00:00 PM
Newer Post Older Post Home