Earlier the Department of Commerce reported:


The U.S. Census Bureau and the U.S. Bureau of Economic Analysis, through the Department of Commerce, announced today that the goods and services deficit was $45.7 billion in January, up $1.0 billion from $44.7 billion in December, revised. January exports were $176.5 billion, $3.8 billion less than December exports. January imports were $222.1 billion, $2.8 billion less than December imports.

The trade deficit was larger than the consensus forecast of $43.9 billion.

The first graph shows the monthly U.S. exports and imports in dollars through January 2016. 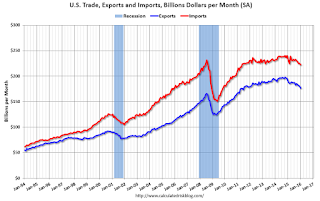 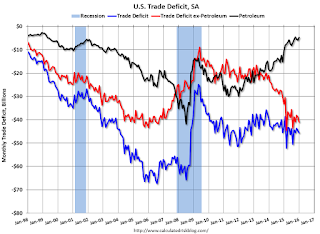 Oil imports averaged $32.06 in January, down from $36.60 in December, and down from $58.96 in January 2015.  The petroleum deficit has generally been declining and is the major reason the overall deficit has declined since early 2012.