CoreLogic: Year Over Year, the Negative Equity Share Has Declined by 3.5 Million Properties


CoreLogic ... today released new analysis showing more than 300,000 homes returned to positive equity in the first quarter of 2014, bringing the total number of mortgaged residential properties with equity to more than 43 million. The CoreLogic analysis indicates that approximately 6.3 million homes, or 12.7 percent of all residential properties with a mortgage, were still in negative equity as of Q1 2014 compared to 6.6 million homes, or 13.4 percent for Q4 2013. As a year-over-year comparison, the negative equity share was 20.2 percent, or 9.8 million homes, in Q1 2013.

Despite the massive improvement in prices and reduction in negative equity over the last few years, many borrowers still lack sufficient equity to move and purchase a home,” said Sam Khater, deputy chief economist for CoreLogic. “One in five borrowers have less than 10 percent equity in their property, which is not enough to cover the down payment and additional costs associated with a conventional mortgage.”
emphasis added 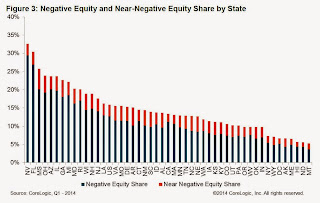 This graph shows the break down of negative equity by state. Note: Data not available for some states. From CoreLogic:

Note: The share of negative equity is still very high in Nevada and Florida, but down significantly from a year ago (Q1 2013) when the negative equity share in Nevada was at 45.4 percent, and at 38.1 percent in Florida. 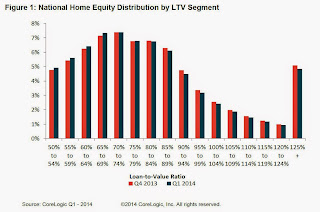 The second graph shows the distribution of home equity in Q1 compared to Q4 2013. Close to 5% of residential properties have 25% or more negative equity, down slightly from Q4.