Another solid regional manufacturing survey, this one from the Dallas Fed: Texas Manufacturing Picks Up and Outlook Improves Notably


Texas factory activity increased for the 12th month in a row in April, according to business executives responding to the Texas Manufacturing Outlook Survey. The production index, a key measure of state manufacturing conditions, rose from 17.1 to 24.7, reaching its highest level in four years and indicating stronger output growth.

Some other measures of current manufacturing activity also reflected more robust growth. The new orders index posted a four-year high, rising to 21.3. The capacity utilization index rose to a multiyear high as well, climbing from 13.1 to 18.7, with a third of manufacturers noting an increase. The shipments index fell 7 points to 12.4, indicating the volume of shipments grew but at a slower pace than in March.

Perceptions of broader business conditions were markedly more optimistic in April. The general business activity index rose for a second consecutive month, increasing from 4.9 to 11.7. The company outlook index jumped nearly 15 points to a four-year high of 23.4, reflecting a sharp rise in optimism among manufacturers. 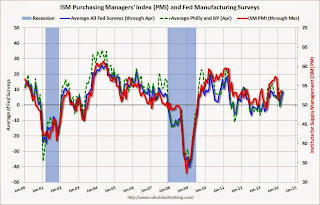 All of the regional surveys showed expansion in April, and it appears the ISM index will be stronger for the month.  The ISM index for April will be released Thursday, May 1st and the consensus is for an increase to 54.2 from 53.7 in March.
Posted by Calculated Risk on 4/28/2014 10:40:00 AM
Newer Post Older Post Home