New home sales is one of the key reports each month (see: Ranking Economic Data).   However - as always - we shouldn't read too much into any one report.

Weather probably played a small role in the disappointing year-over-year change, however higher mortgage rates and higher prices were probably larger factors. Also there were probably supply constraints in some areas and credit remains difficult for many potential borrowers.

In a way this reminds me of 1994/1995.  30 year fixed mortgage rates increased from around 7% in 1993 to over 9% at the end of 1994 (the Fed had raised the Fed Funds rate from 3% to 5 1/2% during that period).  A number of analysts thought the economy was going into recession based on slightly higher taxes, a higher Fed Funds rate - and they were pointing to the slight decline in new home sales as an indicator.  I disagreed.

Mortgage rates are up again - this time from 3.6% a year ago to over 4.3% now (and people are concerned about Fed "tapering").  However sales are even lower (only 429 thousand in 2013), demographics are once again favorable, and I still expect new home sales to increase to 750 thousand to 800 over the next several years.  That will be a significant increase from the  384 thousand sales rate in March!

Maybe sales will move sideways for a little longer, but remember Q1 was a difficult comparison period. Sales in 2013 were up 16.6% from 2012, but sales in Q1 2013 were up over 25% from Q1 of the previous year! The comparisons to last year will be a little easier in a few months - and I still expect to see solid year-over-year growth later this year.


And here is another update to the "distressing gap" graph that I first started posting over four years ago to show the emerging gap caused by distressed sales.  Now I'm looking for the gap to close over the next few years. 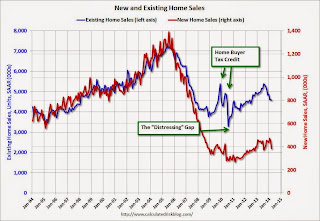 The "distressing gap" graph shows existing home sales (left axis) and new home sales (right axis) through March 2014. This graph starts in 1994, but the relationship has been fairly steady back to the '60s.

Following the housing bubble and bust, the "distressing gap" appeared mostly because of distressed sales. The flood of distressed sales kept existing home sales elevated, and depressed new home sales since builders weren't able to compete with the low prices of all the foreclosed properties.

I expect existing home sales to decline some more or move sideways (distressed sales will slowly decline and be partially offset by more conventional / equity sales).  And I expect this gap to close, mostly from an increase in new home sales.