Note: I'll have much more on the employment report soon. 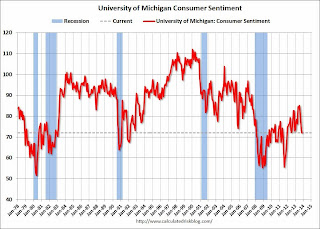 The preliminary Reuters / University of Michigan consumer sentiment index for November was at 72.0, down from the October reading of 73.2.

This was below the consensus forecast of 75.0. Sentiment has generally been improving following the recession - with plenty of ups and downs - and one big spike down when Congress threatened to "not pay the bills" in 2011.

The decline in October and early November was probably due to the government shutdown and another threat to "not pay the bills", but usually sentiment rebounds fairly quickly following event driven declines - and I expect the upward trend to continue soon.