• The government shutdown impacted the unemployment rate and the participation rate. This impact from the shutdown should be reversed in the November report.

• Overall this was a solid employment report (except the impact of the government shutdown).

• Last weekend I noted four items that the Fed would probably be looking at to taper in December. Here were the two related to employment:

2) "If the year-over-year change in employment is still around 2.2 million for November, the FOMC might taper." Employment was up 2.329 million year-over-year in October. It appears very likely this level will be met in the November report.

• Seasonal retail hiring was solid. See the first graph below - this is a good sign for the holiday season ("Watch what they do, not what they say")

• And yes - several people have emailed me - I was thinking there would be an upside surprise for payrolls.

According to the BLS employment report, retailers hired seasonal workers in October at the highest level since 1999. 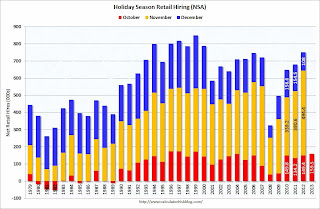 This suggests retailers are somewhat optimistic about the holiday season.  Note: There is a decent correlation between seasonal retail hiring and holiday retail sales. 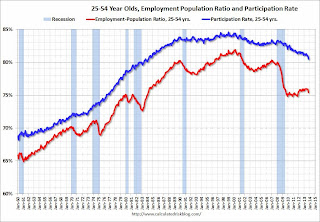 Since the participation rate declined recently due to cyclical (recession) and demographic (aging population) reasons, an important graph is the employment-population ratio for the key working age group: 25 to 54 years old.

These numbers declined sharply in October due to the government shutdown, and should bounce back in the November report. 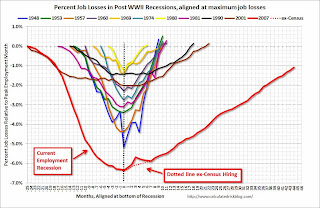 This graph shows the job losses from the start of the employment recession, in percentage terms - this time aligned at maximum job losses.  At the recent pace of improvement, it appears employment will be back to pre-recession levels next year (Of course this doesn't include population growth). 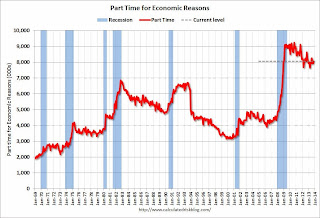 
The number of persons employed part time for economic reasons (sometimes referred to as involuntary part-time workers) was little changed at 8.1 million in October. These individuals were working part time because their hours had been cut back or because they were unable to find a full-time job.

The number of part time workers increased in October to 8.05 million from 7.926 million in September.  This increase was less than expected due to the government shutdown and should be reversed in the November report

These workers are included in the alternate measure of labor underutilization (U-6) that increased to 13.8% in October from 13.6% in September. 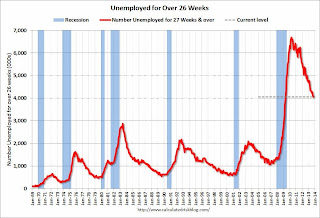 According to the BLS, there are 4.063 million workers who have been unemployed for more than 26 weeks and still want a job. This was down from 4.146 million in September. This is generally trending down, but is still very high.  Long term unemployment remains one of the key labor problems in the US. 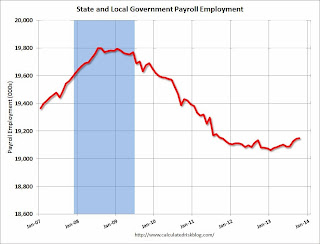