The October ISM Non-manufacturing index was at 55.4%, up from 54.4% in September. The employment index increased in October to 56.2%, down from 52.7% in September. Note: Above 50 indicates expansion, below 50 contraction.

From the Institute for Supply Management: October 2013 Non-Manufacturing ISM Report On Business®


Economic activity in the non-manufacturing sector grew in October for the 46th consecutive month, say the nation's purchasing and supply executives in the latest Non-Manufacturing ISM Report On Business®.

The report was issued today by Anthony Nieves, CPSM, C.P.M., CFPM, chair of the Institute for Supply Management™ Non-Manufacturing Business Survey Committee. "The NMI® registered 55.4 percent in October, 1 percentage point higher than September's reading of 54.4 percent. This indicates continued growth at a faster rate in the non-manufacturing sector. The Non-Manufacturing Business Activity Index increased to 59.7 percent, which is 4.6 percentage points higher than the 55.1 percent reported in September, reflecting growth for the 51st consecutive month. The New Orders Index decreased by 2.8 percentage points to 56.8 percent, and the Employment Index increased 3.5 percentage points to 56.2 percent, indicating growth in employment for the 15th consecutive month. The Prices Index decreased 1.1 percentage points to 56.1 percent, indicating prices increased at a slower rate in October when compared to September. According to the NMI®, 10 non-manufacturing industries reported growth in October. Respondents' comments are mixed with the majority reflecting an uptick in business. A number of respondents indicate that they are negatively impacted by the government shutdown."
emphasis added 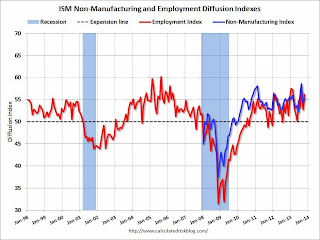 This was above the consensus forecast of 54.5% and indicates faster expansion in October than in September.
Posted by Calculated Risk on 11/05/2013 10:00:00 AM
Newer Post Older Post Home