Notes: This CoreLogic House Price Index report is for September. The recent Case-Shiller index release was for August. The CoreLogic HPI is a three month weighted average and is not seasonally adjusted (NSA). 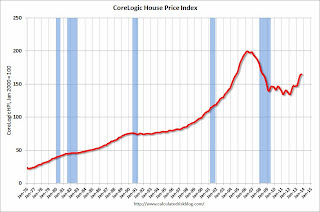 The index was up 0.2% in September, and is up 12.0% over the last year.  This index is not seasonally adjusted, and the month-to-month changes will be smaller for next several months. 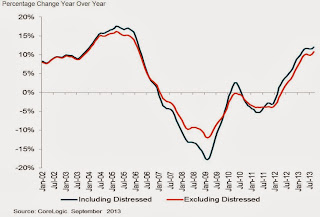 The second graph is from CoreLogic. The year-over-year comparison has been positive for nineteen consecutive months suggesting house prices bottomed early in 2012 on a national basis (the bump in 2010 was related to the tax credit).

This is the largest year-over-year increase since 2006.

I expect the year-over-year price increases to slow in the coming months.
Posted by Calculated Risk on 11/05/2013 08:59:00 AM
Newer Post Older Post Home