“We were a bit discouraged to see factory activity decline in June after it expanded slightly in May,” said Wilkerson. “But quite a few contacts lost production or had shipments delayed due to regional storms and flooding, so the downturn appears like it may be temporary.”

The month-over-month composite index was -5 in June, down from 2 in May but equal to -5 in April and March ... Other month-over-month indexes showed mixed results. The production index dropped from 5 to -17, its lowest level since March 2009, and the shipments and new orders indexes also fell markedly. The order backlog and employment indexes increased somewhat but still remain slightly below zero. 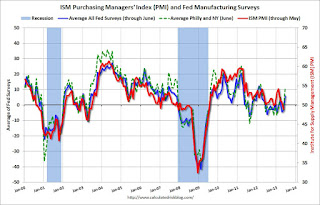 All of the regional surveys - except Kansas City - showed expansion in June, and the Kansas City region was impact by flooding.  The ISM index for June will be released Monday, July 1st, and these surveys suggest a reading above 50 (expansion).
Posted by Calculated Risk on 6/27/2013 12:29:00 PM
Newer Post Older Post Home