Freddie Mac today released the results of its Primary Mortgage Market Survey® (PMMS®), showing average fixed mortgage rates jumping along with bond yields amid recent Fed remarks that it could begin tapering its bond purchases later this year. The average 30-year fixed-rate mortgage rose from 3.93 percent last week to 4.46 percent this week; the highest it has been since the week of July 28, 2011. ...

This graph shows the relationship between the monthly 10 year Treasury Yield and 30 year mortgage rates from the Freddie Mac survey. 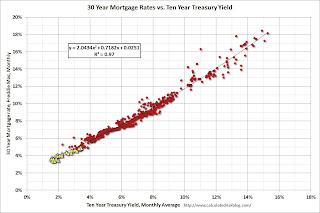 Note: The yellow markers are for the last three years with the ten year yield below 3%. A trend line through the yellow markers only is a little lower, but still over 4.2% at the current 10 year Treasury yield. 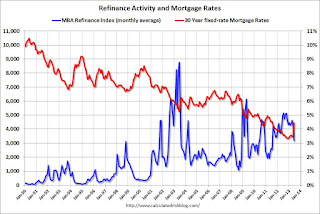 The refinance index has dropped sharply recently (down almost 42% over the last 7 weeks) and will probably decline significantly if rates stay at this level.
Posted by Calculated Risk on 6/27/2013 03:06:00 PM
Newer Post Older Post Home