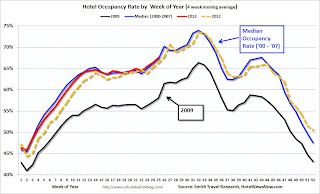 Through June 22nd, the 4-week average of the occupancy rate is slightly higher than the same period last year and is tracking the pre-recession levels. The occupancy rate will probably increase over the next couple of months - the summer travel season is here!