The following graph shows real Personal Consumption Expenditures (PCE) through May (2005 dollars). Note that the y-axis doesn't start at zero to better show the change. 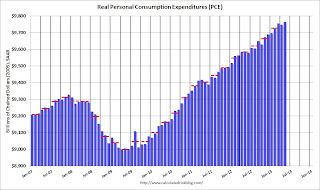 Last week I posted Four Charts to Track Timing for QE3 Tapering . Here is an update to the inflation charts. 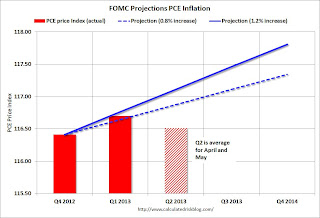 This graph is for PCE prices.

We only have data through May, but so far PCE prices are below this projection - and this projection is significantly below the FOMC target of 2%. Clearly the FOMC expects inflation to pickup, and a key is if the recent decline in inflation is "transitory". 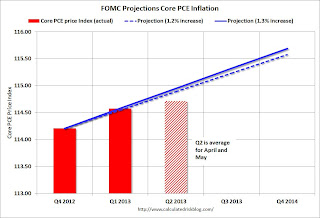 The second graph is for core PCE prices.

Once again we only have data through May, but so far core PCE prices are below this projection - and, once again, this projection is significantly below the FOMC target of 2%. Clearly the FOMC expects core inflation to pickup too.

It is possible that the FOMC could start to taper QE3 purchases in December, but it would take a  pickup in the economy AND an increase in inflation. (September tapering is less likely, but not impossible - but the pickup would have to be significant over the next two months).
Posted by Calculated Risk on 6/27/2013 10:33:00 AM
Newer Post Older Post Home