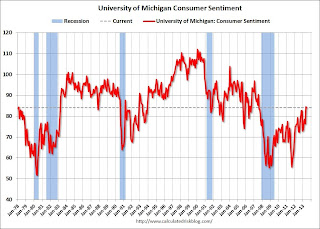 • The final Reuters / University of Michigan consumer sentiment index for June decreased to 84.1 from the May reading of 84.5, but up from the preliminary June reading of 82.7.

This was above the consensus forecast of 83.0. Sentiment has generally been improving following the recession - with plenty of ups and downs - and one big spike down when Congress threatened to "not pay the bills" in 2011.

• From the Chicago ISM:


The Chicago Business BarometerTM declined to 51.6 in June, the largest monthly drop since October 2008, and down from a 14-month high of 58.7 in May. The gyrations seen over the past few months are not typical for the Barometer and some of this might be attributable to the unseasonable weather conditions.
...
Of the five Business Activity measures which make up the Barometer, four declined with only the Employment indicator posting an increase. Order Backlogs plunged deep into contraction to the lowest level since September 2009 and was the single biggest drag on Barometer. Faster Supplier Delivery times and declines in Production and New Orders also contributed to the Barometer’s weakness.