The "Population" is the Civilian Noninstitutional Population, or the number of people 16 and over who are "not inmates of institutions (for example, penal and mental facilities and homes for the aged) and who are not on active duty in the Armed Forces".  This is increasing every month, and increased 167 thousand in March. 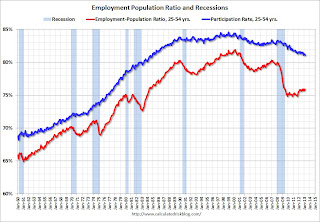 Since the participation rate declined recently due to cyclical (recession) and demographic (aging population) reasons, an important graph is the employment-population ratio for the key working age group: 25 to 54 years old. 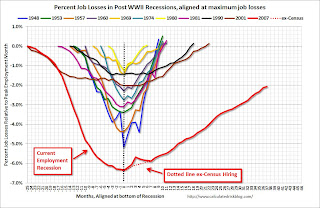 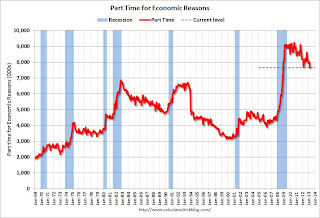 
The number of persons employed part time for economic reasons (sometimes referred to as involuntary part-time workers) fell by 350,000 over the month to 7.6 million. These individuals were working part time because their hours had been cut back or because they were unable to find a full-time job.

The number of part time workers decline in March to 7.64 million from 7.99 million in February. This is the few part time for economic reasons since November 2008.

These workers are included in the alternate measure of labor underutilization (U-6) that declined to 13.8% in March. This is the lowest level for U-6 since December 2008. 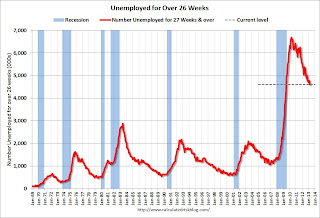 According to the BLS, there are 4.61 million workers who have been unemployed for more than 26 weeks and still want a job. This was down from 4.8 million in February. This is trending down, but is still very high.  This is the fewest long term unemployed since June 2009.  Long term unemployment remains one of the key labor problems in the US. 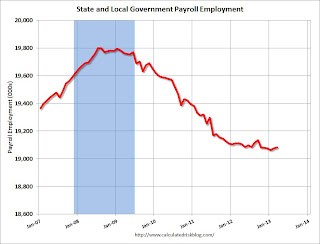 Overall this was a weak report, but there were a few positives including the upward revisions to the January and February reports, the decline in the long term unemployed, and the decline in part time workers to list a few.