A key question is: What has happened to the mortgage delinquency rate over time by state? 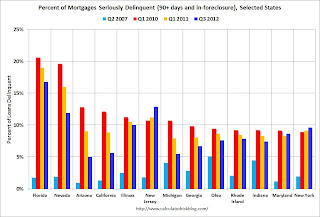 The states that have seen the most improvement - Arizona, California, Michigan, Nevada - are all non-judicial states. Florida is a judicial state that has seen some decline in the seriously delinquent rate. However the serious delinquency rate in New Jersey and New York has increased since Q1 2010.

The national data is useful, but with the different foreclosure processes, we also need to look at state and local data. Some states will be back to a "normal" delinquency rate soon - other states will take years.