Some comments on New Home Sales and Distressing Gap

Think about this ... if new home sales had been at expectations of 370,000 SAAR (seasonally adjusted annual rate), and there had been no revisions to the previous months sales, sales would have averaged 356,000 SAAR for the first six months of the year.

Instead sales came in below expectations for June, but all the revisions to previous months were up, and sales averaged 358,000 SAAR in the first half of 2012.

Of course the reporting focused on the most recent month, but that is misleading. With the upward revisions, sales are a little higher than expected over the first half of 2012. And it is important to note that sales are being revised up every month, and based on the recent trend, June will probably be revised up too. The report this morning was below expectations, it was still fairly solid.

Note: Long term readers will remember that every revision was down in 2006, and each "upside surprise" in the new home sales report was revised away. Now the opposite is happening.


Sales of newly built homes fell hard in June, despite newfound optimism in the housing recovery, especially among the home builders themselves.
...
This is the second miss for housing in the same month. Sales of existing homes fell as well, despite expectations for a gain.

Actually both reports were fairly solid.

For the new home sales report, the key number is sales. As I noted earlier, sales for June were below expectations, but sales for the first six months were slightly above expectations. So I wasn't disappointed in other report - and I think the CNBC headline was wrong - twice!

Here is an update to the distressing gap graph. 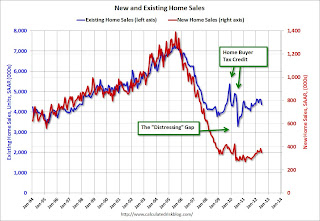 This "distressing gap" graph that shows existing home sales (left axis) and new home sales (right axis) through June. This graph starts in 1994, but the relationship has been fairly steady back to the '60s.

Following the housing bubble and bust, the "distressing gap" appeared mostly because of distressed sales. The flood of distressed sales has kept existing home sales elevated, and depressed new home sales since builders haven't been able to compete with the low prices of all the foreclosed properties.

Flat or declining existing home sales is likely (as the number of distressed sales decline), while new home sales will sluggishly increase. That will eventually close this gap, but it will probably take a number of years.