Nevada is an exception. But Nevada had the largest quarterly decline, and for the first time in years is not in the #2 spot behind Florida - Nevada has dropped to #4. 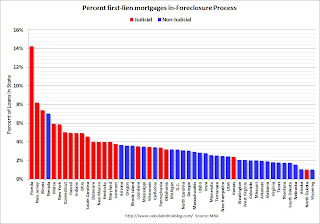 With the mortgage servicer settlement, I expect the number of loans in foreclosure to start to decline in all states.