This indicates expansion in Febraury, at a faster pace than in January, and slightly above the consensus forecast of +8.4. 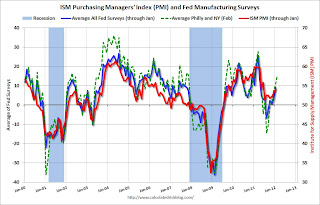 Here is a graph comparing the regional Fed surveys and the ISM manufacturing index. The dashed green line is an average of the NY Fed (Empire State) and Philly Fed surveys through February. The ISM and total Fed surveys are through January.

The average of the Empire State and Philly Fed surveys increased again in February, and is at the highest level since April 2011.