The following graph shows existing home sales (left axis) and new home sales (right axis) through December. This graph starts in 1994, but the relationship has been fairly steady back to the '60s. 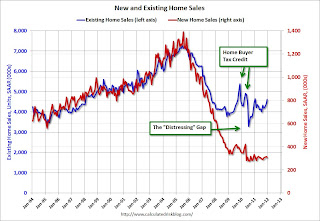 I expect this gap to eventually close once the number of distressed sales starts to decline.