The month-over-month composite index was 7 in January, up from revised totals of -2 in December and 4 in November. The composite index is an average of the production, new orders, employment, supplier delivery time, and raw materials inventory indexes. ... The production and shipments indexes jumped to their highest levels since June, and the new orders index climbed from -2 to 8.

All of the regional manufacturing surveys have indicated stronger expansion in January (Empire state, Philly, Richmond and Kansas City). The Dallas Fed survey is scheduled to be released on Monday.


Led by improvements in production- and employment-related indicators, the Chicago Fed National Activity Index increased to +0.17 in December from –0.46 in November. ...
The index’s three-month moving average, CFNAI-MA3, increased from –0.19 in November to –0.08 in December—its highest value since March 2011. December’s CFNAI-MA3 suggests that growth in national economic activity was slightly below its historical trend. The economic slack reflected in this level of the CFNAI-MA3 suggests limited inflationary pressure from economic activity over the coming year. 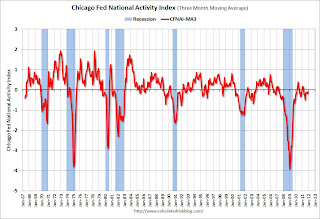 • From the Philly Fed:


The Federal Reserve Bank of Philadelphia has released the coincident indexes for the 50 states for December 2011. In the past month, the indexes increased in 39 states, decreased in seven, and remained unchanged in four (Arizona, Nebraska, New York, and Wyoming) for a one-month diffusion index of 64. 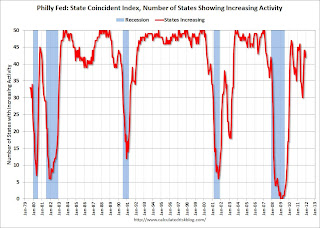 In December, 42 states had increasing activity, down from 44 in November. 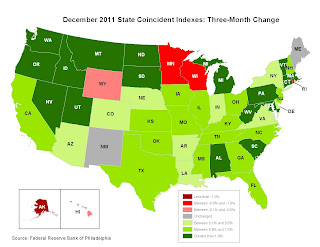 Here is a map of the three month change in the Philly Fed state coincident indicators. This map was all red during the worst of the recession, and all green in early 2011 - but this is an improvement from last summer.
Posted by Calculated Risk on 1/26/2012 02:31:00 PM
Newer Post Older Post Home