The Census Bureau reports New Home Sales in December were at a seasonally adjusted annual rate (SAAR) of 307 thousand. This was down from a revised 314 thousand in November (revised down from 315 thousand). 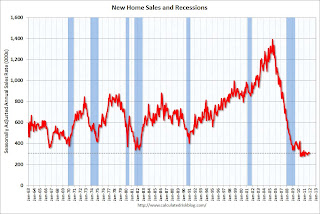 Months of supply increased to 6.1 in December. 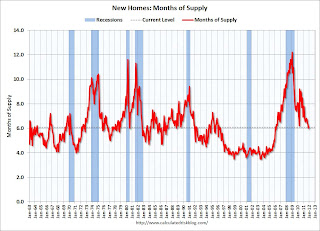 This is now close to normal (less than 6 months supply is normal).


The seasonally adjusted estimate of new houses for sale at the end of December was 157,000. This represents a supply of 6.1 months at the current sales rate. 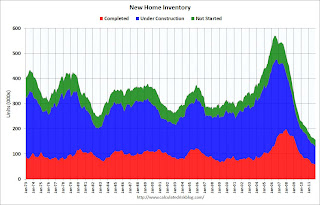 The inventory of completed homes for sale was at 61,000 units in December. The combined total of completed and under construction is at the lowest level since this series started.

In December 2011 (red column), 21 thousand new homes were sold (NSA). This was the weakest December since this data has been tracked, and was below the previous record low for December of 23 thousand set in 1966 and tied in 2010. The high for December was 87 thousand in 2005. 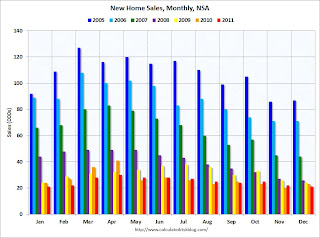 This was below the consensus forecast of 320 thousand, and was a new record low for the month of December (NSA).

New home sales have averaged only 300 thousand SAAR over the 20 months since the expiration of the tax credit ... mostly moving sideways at a very low level.
Posted by Calculated Risk on 1/26/2012 10:00:00 AM
Newer Post Older Post Home