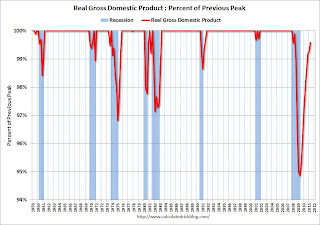 This graph is for real GDP through Q2 2011 and shows real GDP is still 0.4% below the previous pre-recession peak.

Note: There are really two measures of GDP: 1) real GDP, and 2) real Gross Domestic Income (GDI). The BEA will release GDI with the 2nd GDP estimate.

For the following graph, red is residential, green is equipment and software, and blue is investment in non-residential structures. The usual pattern - both into and out of recessions is - red, green, blue. 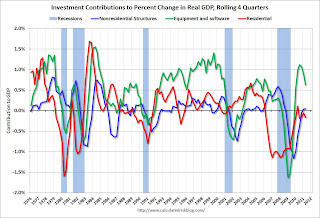 Residential Investment (RI) made a positive contribution to GDP in Q2 2011, however the four quarter rolling average is still negative. The rolling four quarter average for RI will probably turn positive in Q3.

Equipment and software investment has made a significant positive contribution to GDP for eight straight quarters (it is coincident). 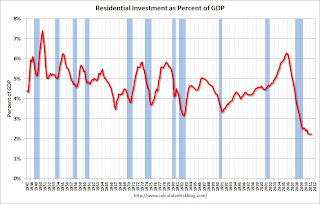 Residential Investment (RI) increased slightly in Q2, and as a percent of GDP, RI is just above the record low set last quarter.

I expect RI to increase in 2011 and add to both GDP and employment growth - for the first time since 2005 (even with the weak first half, this appears correct). 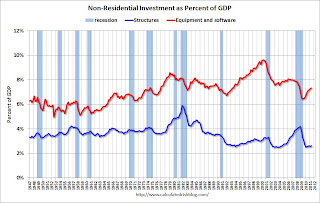 Equipment and software investment has been increasing sharply, however investment growth only increased in Q2 at a 5.7% annualized rate - the slowest rate since investment declined in Q2 2009.

Non-residential investment in structures increased in Q2, and is just above the record low. I'll add details for investment in offices, malls and hotels next week.