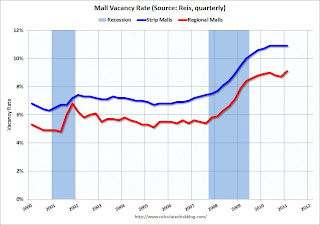 
The vacancy rate [at U.S. regional malls] climbed to 9.1 percent from 8.9 percent a year earlier and 8.7 percent in the fourth quarter, [Reis reported]. It was the highest since Reis began publishing data on regional malls in the beginning of 2000.

At neighborhood and community shopping centers, which usually are anchored by discount and grocery stores, the vacancy rate rose to 10.9 percent from 10.7 percent a year earlier. The rate was unchanged from the three previous quarters and the highest since it reached 11 percent in 1991, according to Reis.

As noted in the article, stores are still being closed as long term leases expire.