Notes: CoreLogic reports the year-over-year change. The headline for this post is for the change from January to February 2011. The CoreLogic HPI is a three month weighted average of December, January and February, and is not seasonally adjusted (NSA).

Despite the continued overall decline, home prices excluding distressed properties are showing signs of stability according to Mark Fleming, chief economist with CoreLogic. “When you remove distressed properties from the equation, we’re seeing a significantly reduced pace of depreciation and greater stability in many markets. Price declines are increasingly isolated to the distressed segment of the market, mostly in the form of REO sales, as the stock of foreclosures is slowly cleared." he said. 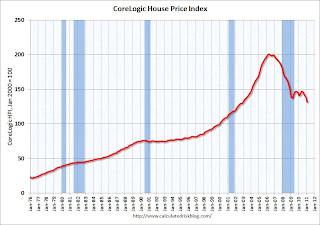