The Census Bureau reported the homeownership and vacancy rates for Q4 2010 this morning. 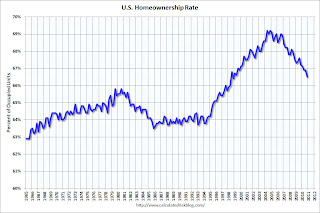 Note: graph starts at 60% to better show the change.

The homeownership rate increased in the '90s and early '00s because of changes in demographics and "innovations" in mortgage lending. Some of the increase due to demographics (older population) will probably stick, so I've been expecting the rate to decline to around 66%, and probably not all the way back to 64%. 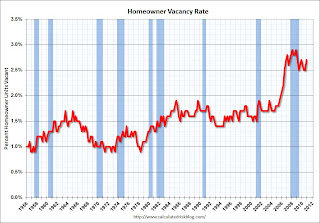 A normal rate for recent years appears to be about 1.7%.

This leaves the homeowner vacancy rate about 1.0% above normal. This data is not perfect, but based on the approximately 75 million homeowner occupied homes, we can estimate that there are close to 750 thousand excess vacant homes. 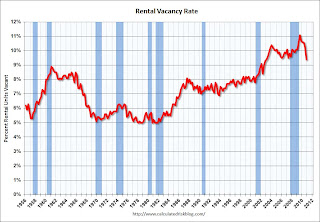 This decline fits with the Reis apartment vacancy data and the NMHC apartment survey. This report is nationwide and includes homes for rent.

It's hard to define a "normal" rental vacancy rate based on the historical series, but we can probably expect the rate to trend back towards 8%. According to the Census Bureau there are close to 42 million rental units in the U.S. If the rental vacancy rate declined from 9.4% to 8%, then 1.4% X 42 million units or about 600 thousand excess units would have to be absorbed.

This suggests there are still about 1.35 million excess housing units. This number has been steadily declining over the last few quarters, but there is still a long way to go.