From earlier this morning ...

• From the Chicago Business Barometer™ Gained: The overall index increased to 68.8 from 66.8 in December. This was above consensus expectations of 65.0. Note: any number above 50 shows expansion.

"EMPLOYMENT strengthened to a height not seen since May 1984". The employment index increased sharply to 64.1 from 58.4.

"NEW ORDERS increased to the highest point since December 1983". The new orders index increased to 75.7 from 71.3.

This was a strong report.


Texas factory activity held steady in January, according to business executives responding to the Texas Manufacturing Outlook Survey. The production index, a key measure of state manufacturing conditions, came in at zero, suggesting output was unchanged from December.
...
Labor market indicators continued to reflect expansion, although increases in employment and hours worked abated. The employment index came in at a reading of 9 [down from 16.1 in December], with 21 percent of firms reporting hiring compared with 12 percent reporting layoffs. The hours worked index fell from 14 to 4, while the wages and benefits index rose.

This is the last of the regional Fed surveys for January. The regional surveys provide a hint about the ISM manufacturing index, as the following graph shows. 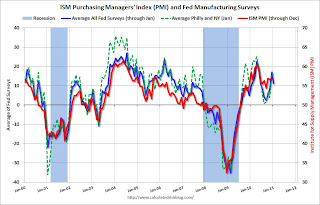 The regional surveys suggest the ISM manufacturing index will in the mid-to-high 50s (fairly strong expansion). The ISM index for January will released tomorrow, Feb 1st. The consensus is for an increase to 57.9 from 57.0 in December.
Posted by Calculated Risk on 1/31/2011 12:05:00 PM
Newer Post Older Post Home