First - the advance Q3 GDP report released last Friday showed an annualized real increase of 3.9% for investment in non-residential structures. This broke a streak of eight straight quarterly declines. However the construction spending report released this morning suggests that most (probably all) of this gain will be revised away.

Second - with the release of underlying detail data today - we can see that most of the reported small gains for non-residential structure investment in Q3 were for power and petroleum mining structures.

If we look at just office, mall and lodging investment, non-residential structure investment continued to decline in Q3. 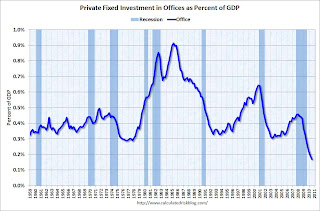 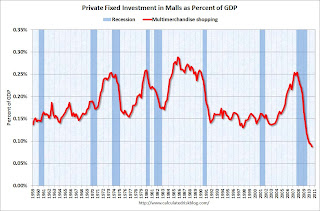 The second graph is for investment in malls.

Investment in multimerchandise shopping structures (malls) peaked in 2007 and has fallen by two-thirds (note that investment includes remodels, so this will not fall to zero). Mall investment is also at a series low (as a percent of GDP).

Reis reported that the mall vacancy rate declined slightly in Q3 2010 from the record high in Q2. However the vacancy rate will have to decline substantially before there is significant new investment. 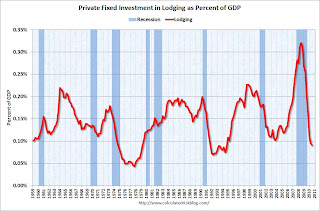 The third graph is for lodging (hotels).

As projects are completed there will be little new investment in these categories for some time.

Also notice that investment for all three categories typically falls for a year or two after the end of a recession, and then usually recovers very slowly (flat as a percent of GDP for 2 or 3 years). Something similar will probably happen again, and there will not be a recovery in these categories until the vacancy rates fall significantly.