From the National Multi Housing Council (NMHC): Across-the-Board Improvement in the Apartment Industry, According to NMHC Quarterly Survey of Apartment Market Conditions


The Market Tightness Index, which measures changes in occupancy rates and/or rents, decreased from 83 to 77, but remained well above the “break-even” mark of 50. Sixty percent of respondents said markets were tighter, meaning lower vacancies and/or higher rents.
...
“While demand for apartment residences and apartment properties is still below the peak levels seen in the last decade, the further shift from owning to renting may well add to apartment demand in the near-term, while population growth and a rebound in household formation should strengthen demand over the longer term. But at some point, economic growth will have to shift into a higher gear for the apartment industry to see conditions continue to register improvements of this level.” [said NMHC Chief Economist Mark Obrinsky] 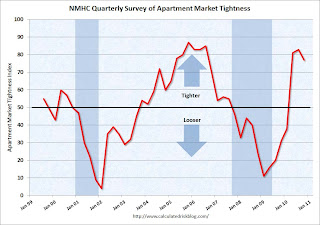 The index has indicated tighter market conditions for the last three quarters (from very weak conditions).

A reading above 50 suggests the vacancy rate is falling. Based on limited historical data, I think this index will lead reported apartment rents by about 6 months to 1 year.

This fits with the recent Reis data showing apartment vacancy rates fell in Q3 to 7.2% from 7.8% in Q2.

Also this data is a survey of large apartment owners only. The data released in late July from the Census Bureau showed the rental vacancy rate was steady in Q2 for all rental units in all areas. The Census Bureau will release the Q3 vacancy rates tomorrow, along with the homeownership rate.

A final note: The results of this survey suggest the rental market might have bottomed. I heard from a few sources that effective rents increased slightly over the first half of 2010 at some large apartment complexes. Just something to be aware of ... (I've posted about this before).
Posted by Calculated Risk on 11/01/2010 03:29:00 PM
Newer Post Older Post Home