From the Institute for Supply Management: October 2010 Manufacturing ISM Report On Business®


The report was issued today by Norbert J. Ore, CPSM, C.P.M., chair of the Institute for Supply Management™ Manufacturing Business Survey Committee. "The manufacturing sector grew during October, with both new orders and production making significant gains. Since hitting a peak in April, the trend for manufacturing has been toward slower growth. However, this month's report signals a continuation of the recovery that began 15 months ago, and its strength raises expectations for growth in the balance of the quarter. Survey respondents note the recovery in autos, computers and exports as key drivers of this growth. Concerns about inventory growth are lessened by the improvement in new orders during October. With 14 of 18 industries reporting growth in October, manufacturing continues to outperform the other sectors of the economy." 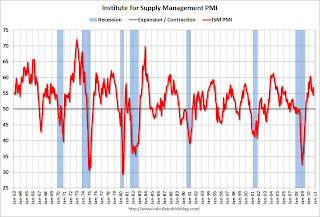 In addition to the increase in the PMI, the ISM's new orders index was up sharply to 58.9 from 51.1 in September.

The employment index increased to 57.7 from 56.5 in September.

And the inventory index declined to 53.9 from 55.6, but this was the 4th month in a row of increasing inventories.

The internals were stronger this month. It was just last month that Ore cautioned that the new orders and inventory indexes were "sending strong negative signals of weakening performance in the [manufacturing] sector".

The increase in the ISM index was in line with the increases in the regional Fed manufacturing surveys.
Posted by Calculated Risk on 11/01/2010 10:00:00 AM
Newer Post Older Post Home