Note: This will be the last "ex-Census" report this decade.


Nonfarm payroll employment edged down (-95,000) in September, and the unemployment rate was unchanged at 9.6 percent, the U.S. Bureau of Labor Statistics reported today. Government employment declined (-159,000), reflecting both a drop in the number of temporary jobs for Census 2010 and job losses in local government. Private-sector payroll employment continued to trend up modestly (+64,000). 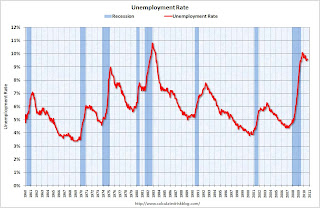 This graph shows the unemployment rate vs. recessions.

Nonfarm payrolls decreased by 95 thousand in August. The economy has gained 334 thousand jobs over the last year, and lost 7.75 million jobs since the recession started in December 2007. 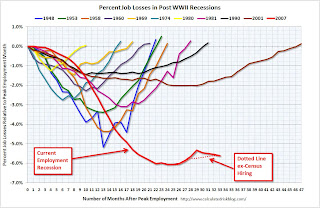 The dotted line is ex-Census hiring. The two lines have joined since the decennial Census is almost over.

For the current employment recession, employment peaked in December 2007, and this recession is by far the worst recession since WWII in percentage terms, and 2nd worst in terms of the unemployment rate (only early '80s recession with a peak of 10.8 percent was worse).

Note: The preliminary benchmark payroll revision is minus 366,000 jobs. This is a little larger than the normal adjustment (last year was especially large). The actual adjustment will be made in February 2011. This is the preliminary estimate of the annual revision, from the BLS: "The benchmark adjustment, a standard part of the payroll survey estimation process, is a once-a-year re-anchoring of the sample-based employment estimates to full population counts available principally through unemployment insurance (UI) tax records filed by employers with State Employment Security Agencies."

This is another weak employment report. I'll have much more soon ...