CR Note: This series is from reader "some investor guy".

Financial institutions, governments, and central banks can be creative in a crisis. Policy options fall into three broad groups: options for deeply distressed or defaulted sovereigns; options for creditors; and regulatory policies. In this part, we discuss the first two. Regulatory options will come in a later part.

In our Really Bad scenario, about half of the sovereign debt is in default, and more would be downgraded so that it isn’t useful as collateral in many circumstances. In 2008, central banks from many countries provided cash and guarantees to help with the crisis. What happens when many of those governments and central banks are themselves in trouble? That too has happened before, coincidentally often shortly after banking crises. 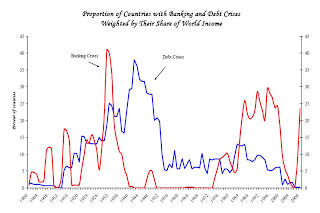 The authors claim that

Options for Distressed or Defaulted Sovereigns. What will sovereigns do? Some of the more common or reasonable options which are available to sovereigns who are in distress or at high risk of default include:

1. Dialing for Dollars (or Euros, Yen, or other currencies). Just like a college student who is out of money, many countries will call their friends, relatives, and business associates. They will be looking for gifts, subsidies, loans, guarantees, and cosigners. Sometimes, having a big letter of credit and some liquidity buys enough time to actually fix things.

Greece called the EU and the IMF for help. We will probably see more of that from other countries. Many people are surprised to find that usually most of the loan commitments made by the IMF are not drawn upon.

2. The most common option, for those in or near default is to negotiate with creditors. This could involve combinations of reducing principal, extending maturity, and reducing interest rates. For some sovereigns, there might be new debt in a different currency, like Drachma, or Lira instead of Euros. For an interesting and detailed overview of options for Greece, see How to Restructure Greek Debt, by Buchheit and Gulati.

3. Print money to pay debts. Not all countries can do this. Members of the euro can’t unilaterally print money. Greece can’t just print its own money. Japan can. A large number of countries can print their own money, but most of their debt is in dollars or euros. For example, many eastern European countries can print, but have debts in euros. 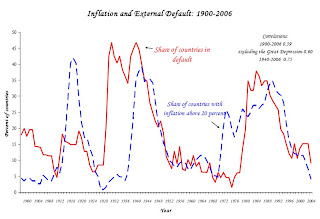 If they print, they have to convert that money to another currency. Historically, inflation has not generally been a method of preventing defaults, but as often occurred at the same time or shortly afterward. (chart source: This Time is Different: A Panoramic View of Eight Centuries of Financial Crises, Reinhart & Rogoff).

4. Print money, sell assets, or borrow from others to buy back your debts at a large discount. No need to default.

Usually governments try to calm bond market fears to keep their borrowing costs low. However, if many owners of your debt are very worried, are scrambling for cash, or are willing to part with bonds priced at 50 cents on the dollar, it is the author’s opinion that you should strongly consider taking the deal. Those are likely to be medium to long term bonds, and you could cut your debt service substantially for years, or even decades.

Ford did a version of this in 2009 and paid less than half of face value. Here is an overview. Fabulous idea in the right circumstances (even though one of the rating agencies completely missed the point and thought it was equivalent to selective default, they clued in later). The hard part of doing this is usually finding enough cash to buy back debt at a deep discount. Ford had plenty of cash, always a good thing to have in a crisis.

If you happen to be a government with some very marketable assets lying around (e.g., gold, oil, a pile of hard currency in a sovereign wealth fund) and you are not in default, this could work out quite well. Brazil is a country that has successfully done this, and gotten a rating upgrade.

Governments with no distress have also bought back bonds. In 2000, the US Treasury was running a surplus (remember that? Seems so long ago), and bought back billions in 30 year bonds.

5. Austerity. Austerity is often useful for countries in moderate distress, especially if they could balance their budget with debt restructuring. For countries who have already defaulted, austerity is commonly part of emerging from default. Austerity is not useful if lot of money is required quickly. That could easily happen when maturing debt needs to be rolled over, and no one wants to buy it.

It could also happen on interest rate or FX derivatives. In a crisis, swap payments and/or collateral could be rising quickly, and would be due on short time horizons. A few months at the most, and sometimes a few hours.

And there are some slightly edgier options. Some of these might be fully justified in certain circumstances. Others might just be ways of disguising default, seizure, or stupidity.

6. Default only on the foreign debt. It is common for a country to issue multiple types of debt, often with one class of debt mostly owned by residents, and another class mostly owned by foreigners.

Domestic financial interests, voters, and even graffiti taggers often understand the difference, and often put pressure on governments to “stick it to the foreign investors”. Oddly, the opposite often occurs, with domestic debt being devalued along with the domestic currency, and foreign debt remaining in dollars or euros. 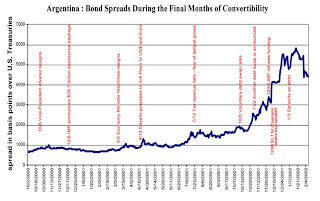 Why would a debtor seize assets? Three common answers: because they can; because they feel they “have to”; or because they feel they have been wronged. One example is Argentina in 2001, which expropriated $3.1 billion of pension assets in exchange for Treasury notes in Dec 2001, and then defaulted anyway in Jan 2002. This chart shows a timeline of how things went wrong.

8. Claim fraud and try not to pay, especially for OTC derivatives. The possible rationales are endless. An example case from Italy is here. Prosecutor “Robledo alleges the London units of the four banks misled Milan on the economic advantage of a financing package that included the swaps and earned 101 million euros in hidden fees.
He also claims the banks violated U.K. securities rules by failing to inform Milan in writing that for the swap deal the city was a counterparty to the lenders rather than a customer. Banks abiding by the rules of the Financial Services Authority are required to shield customers from conflicts of interest and provide them with clear and fair information that isn’t misleading.” The prosecutor seized assets from the banks equal to their share of the alleged profit.

9. Claim that contracts were invalid in the first place. An example of this is Iceland, “Iceland’s lenders may lose as much as $4.3 billion, equivalent to a third of the economy, after a court last month found that some foreign loans were illegal”. There may also be sovereigns claiming that some official was not authorized to enter into particular loans or derivatives.

10. Claim the people who entered into certain contracts were trying to cause default or distress for the sovereign. Germany made this illegal earlier this year.

11. Depose, subpoena, or even arrest some of the counterparties. A number of countries have rather different legal traditions than the US, the EU, or Japan, and lots of their jails aren’t up to Western standards either. Your typical counterparty doesn’t have these kinds of powers. Once a regulator or prosecutor starts digging, they might find nothing. Or, they might find something extremely damaging. Even charges unrelated to cheating a sovereign could carry some serious jail time, like bid-rigging, money laundering, or tax evasion.

There are also some recent examples of central bankers or bank CEOs being arrested, which might affect whether the sovereigns would honor contracts they entered into (Kosovo Central Banker, Nigerian banks and customers, multibillion forged claims on UAE Central Bank on two separate occasions). Here, here and here.

12. Cut loose sovereign wealth funds, quasi national organizations, and other borrowers or CDS participants which are separate legal entities. Depending on “moral obligations” or “implied guarantees” is always risky. Investors in Fannie Mae and Freddie Mac bonds won their bets that the US government would step in. This will not necessarily be the case elsewhere.

13. And of course, do positive spin, even lie about financial condition. “If a government wants to cheat, it can cheat,” said Garry Schinasi, a veteran of the International Monetary Fund’s capital markets surveillance unit, which monitors vulnerability in global capital markets. Source.

Options for Creditors. For creditors, there are some interesting options. Common ones include:

1. Reduce trade credit, try to get trade sanctions. These are very common measures.

2. Press for higher taxes, business-friendly regulations, austerity. These are straight out of the traditional IMF playbook (now slightly modified).

3. Get your government to bail you out, perhaps by buying defaulted bonds above market price. Another possibility for partial recovery is getting changes to the tax code, such as allowing losses to be carried back, or offset against other forms of income.

4. Seize local assets. There is a long history of this, and sovereigns with extensive foreign assets could be at risk. Recently there was an unsuccessful suit by a creditor to seize assets of Argentina held in the US to compensate for defaulted Argentina bonds.

5. Convince your own government to sail gunboats into the harbor of the capital. Sell tickets to the news media. Venezuela in 1913 was a prominent example. Two discussions of how prevalent this method of collection once was or wasn’t are at here and here. This has been rare to nonexistent since World War I. However, looking at the earlier experience, it would be a bad idea to already have major military powers upset at you and default on your bonds. Killing or kidnapping foreign citizens was especially likely to get a response. Having large oil or mineral reserves might also make a country a target.

6. Turn the borrower into part of another country. Yes, there are sometimes sovereign consolidations due to finances. This happens more often at the municipal level, but in the early 1930s Newfoundland went from semi-independent status to being part of Canada. Much of the reason was Canada’s willingness to pay most of Newfoundland’s debt. More details here. While this might occur somewhere at the country level in the Really Bad scenario, it’s more likely to happen with municipalities, provinces, or states.


Disclosures: At a prior job Some Investor Guy had a number of automakers as clients. He owns some Ford bonds, some other corporate bonds, and some municipals. He owns no foreign sovereigns, because he is expecting prices to fall and yields to rise on many of them. He owns no gold, has very little in equities, some real estate, and a lot of cash. Make your own decisions on what your portfolio should be. This is disclosure, not investment advice. Some Investor Guy has no remote doomstead or bomb shelters, but thinks everyone should have a week’s worth of water and food. There are plenty of disasters where those could be useful. He does sometimes talk to regulators and lawmakers.

Next: Part 5D. What if Things Go Really Badly? Banks. This part was moved a bit later to allow more thorough analysis of the European Bank Stress Tests.

CR Note: This series is from "Some investor guy"