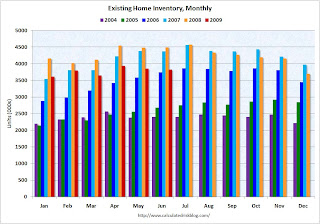 Here is another graph of inventory. This shows inventory by month starting in 2004.

Inventory in June 2009 was below the levels in June 2007 and June 2008 (this is the 5th consecutive month with inventory levels below 2 years ago) and almost down to the levels of June 2006.

It is important to watch inventory levels very carefully. If you look at the 2005 inventory data, instead of staying flat for most of the year (like the previous bubble years), inventory continued to increase all year. That was one of the key signs that led me to call the top in the housing market!

Note: there is probably a substantial shadow inventory – homeowners wanting to sell, but waiting for a better market - so existing home inventory levels will probably stay elevated for some time. There are also reports of REOs being held off the market, so inventory is probably under reported. 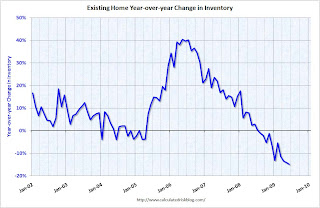 Prices will probably continue to fall until the months of supply reaches more normal levels (closer to 6 months compared to the current 9.4 months), and that will take some time.