Existing-home sales – including single-family, townhomes, condominiums and co-ops – increased 3.6 percent to a seasonally adjusted annual rate of 4.89 million units in June from a downwardly revised pace of 4.72 million in May, but are 0.2 percent lower than the 4.90 million-unit level in June 2008.
...
Total housing inventory at the end of June fell 0.7 percent to 3.82 million existing homes available for sale, which represents a 9.4-month supply at the current sales pace, down from a 9.8-month supply in May. 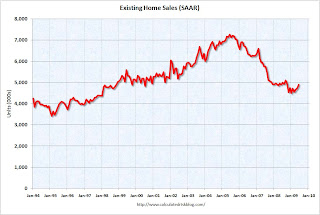 Here is another way to look at existing homes sales: Monthly, Not Seasonally Adjusted (NSA): 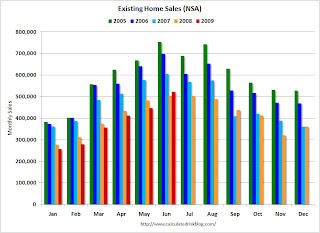 This graph shows NSA monthly existing home sales for 2005 through 2009. For the first time in several years, sales (NSA) were slightly higher in June 2009 than in June 2008.

It's important to note that the NAR says about one-third of these sales were foreclosure resales or short sales. Although these are real transactions, this means activity (ex-distressed sales) is much lower. The third graph shows nationwide inventory for existing homes. According to the NAR, inventory decreased to 3.82 million in June. The all time record was 4.57 million homes for sale in July 2008. This is not seasonally adjusted.

Typically inventory increases in June, and peaks in July or August. This decrease in inventory was a little unusual.

Also, many REOs (bank owned properties) are included in the inventory because they are listed - but not all. Recently there have been stories about a substantial number of unlisted REOs and other shadow inventory - so this inventory number is probably low. 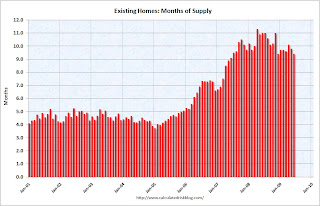 The fourth graph shows the 'months of supply' metric for the last six years.

Months of supply declined to 9.4 months.