NOTE: All of these numbers are on  a seasonally adjusted annual rate basis (SAAR).

Transfer payments decreased by $1.1 trillion in May (SAAR), after increasing $3 trillion in April (SAAR).

And "Other" (mostly the CARES Act one time payments) decreased by $2 trillion in May (SAAR).

Without the decrease in transfer payments, Personal Income in April would have increased about 1.5%.

A key measure of the health of the economy (Used by NBER in recession dating) is Real Personal Income less Transfer payments. 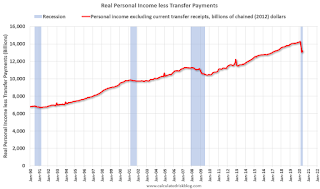 This measure of economic activity decreased 2.9% in March, compared to February, and another 6.1% in April (compared to March).

This measure increased 1.5% in May compared to April, but is still down 7.5% compared to February (pre-recession).