The following graph shows real Personal Consumption Expenditures (PCE) through May 2020 (2012 dollars). Note that the y-axis doesn't start at zero to better show the change. 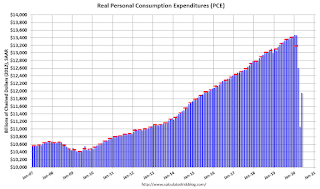 The decrease in personal income was less than expected,  and the increase in PCE was below expectations.

Note that core PCE inflation was below expectations.
Posted by Calculated Risk on 6/26/2020 08:36:00 AM
Newer Post Older Post Home