Comments on May Housing Starts

Although housing starts declined significantly in April - and remained fairly low in May - residential construction is considered essential, and starts did not decline as sharply as some other sectors.

Based on builder reports, and recent housing activity, I expect a significant increase in single family starts over the next couple of months.

Earlier: Housing Starts increased to 974 Thousand Annual Rate in May

Total housing starts in May were well below expectations, and revisions to prior months were negative (combined).

This first graph shows the month to month comparison for total starts between 2019 (blue) and 2020 (red). 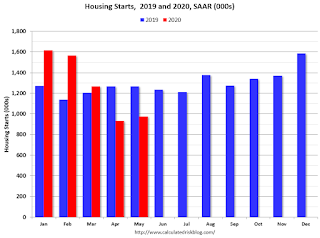 Last year, in 2019, starts picked up in the 2nd half of the year, so the comparisons are easy early in the year. 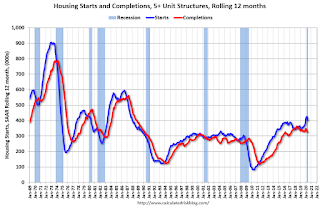 The rolling 12 month total for starts (blue line) increased steadily for several years following the great recession - then mostly moved sideways.  Completions (red line) had lagged behind - then completions caught up with starts- although starts picked up a little again lately. 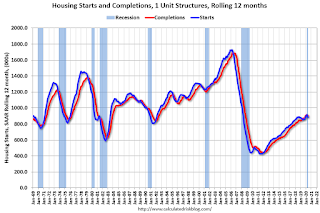