In the Personal Income & Outlays report for April, the BEA noted that "Personal income increased $1.97 trillion (10.5 percent) in April". This was due to a large increase in transfer payment.

Without the increase in transfer payments, Personal Income in April would have declined by about  6%.

A key measure of the health of the economy (Used by NBER in recession dating) is Real Personal Income less Transfer payments. 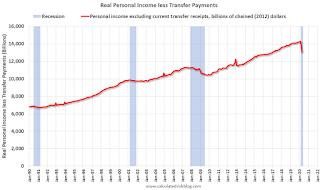 This measure of economic activity decreased 2.8% in March, compared to February, and another 6.3% in April (compared to March).