Total nonfarm payroll employment rose by 273,000 in February, and the unemployment rate was little changed at 3.5 percent, the U.S. Bureau of Labor Statistics reported today. Notable job gains occurred in health care and social assistance, food services and drinking places, government, construction, professional and technical services, and financial activities.
...
Federal employment increased by 8,000, reflecting the hiring of 7,000 temporary workers for the 2020 Census.
...
The change in total nonfarm payroll employment for December was revised up by 37,000 from +147,000 to +184,000, and the change for January was revised up by 48,000 from +225,000 to +273,000. With these revisions, employment gains in December and January combined were 85,000 higher than previously reported.
...
In February, average hourly earnings for all employees on private nonfarm payrolls increased by 9 cents to $28.52. Over the past 12 months, average hourly earnings have increased by 3.0 percent.
emphasis added 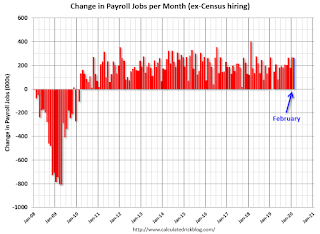 Payrolls for December and January were revised up 85 thousand combined. 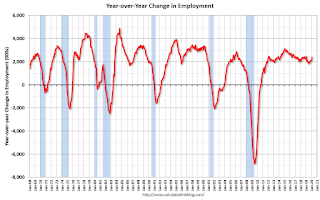 In February, the year-over-year change was 2.409 million jobs. 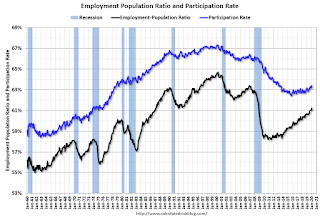 The Labor Force Participation Rate was unchanged at 63.4% in February. This is the percentage of the working age population in the labor force.   A large portion of the recent decline in the participation rate is due to demographics and long term trends. 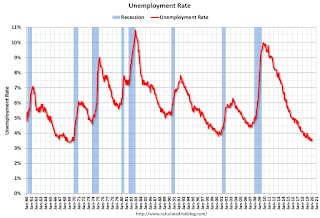 The unemployment rate decreased in February to 3.5%.

This was well above consensus expectations of 175,000 jobs added, and December and January were revised up by 85,000 combined.